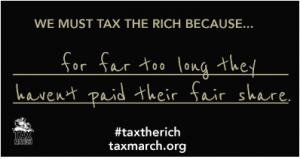 Are you tired of the rich getting all the tax breaks?

If you fill out the form below, we’ll print it onto a postcard for you to be delivered later this year to Senator Ernst.

Here is the text of some of the postcards we’ve already collected: