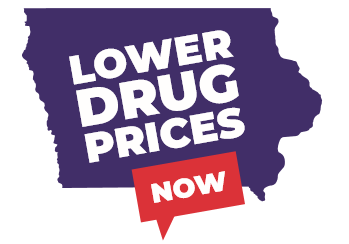 Whether we are in a rural community or in the suburbs of one of Iowa’s great cities, more and more of us are unable to afford the medicines we need to manage our health.

Iowa Senator Joni Ernst keeps claiming to care about the high cost of prescription drugs, saying she is fighting for Iowans, but the reality is she has failed to take real action.

Here at Lower Drug Prices Now we are fighting back.

And we invite YOU to join us by clicking HERE to sign up!

No one has prospered more under President Trump’s policies than the massive prescription drug corporations who have been padding their profits for years at the expense of patients and are now reaping even bigger rewards for it.

The President, after praising the Medicare negotiations bill — the Lower Drug Costs Act (HR 3) that passed in the House in December has now withdrawn his support. Rather than working to pass a bill that would finally empower the federal government to negotiate for lower prices in Medicare and apply those lower prices to private insurance for hundreds of drugs, he is again ignoring the issue.

Senator Mitch McConnell has refused to even hear the bill, declaring it “dead on arrival” before any debate started. If Senator Ernst really wanted to do something to lower drug prices and help Iowans, she would stand up for us instead of caving to Senator McConnell.

She would urge him and the President to support the bill and pass it into law instead of obstructing negotiations and expansions to Medicare.

Let’s join together and tell Senator Ernst that we are struggling with wages, the rising cost of healthcare and drug corporation price-gouging and we expect her to actually represent US.

If you’re going to your precinct caucus on February 3rd, here is a resolution you can submit: LPDN Resolution